“.Net Standard is an API specification for a given version while .Net core is a framework that is optimized for building cloud, console, Asp.Net Core, and UWP applications. It’s nothing but an implementation of .Net standard for base class libraries.”

So, before digging deep inside what sets these three TMF’s apart, let’s get the basic concept cleared.

Whenever you create any C# project, you’ll be popped up with a .csproj file, which is nothing but your C# project file. Basically, these files have two versions:

1. Old format: It’s what you get by default with .Net framework projects.
2. New format: (SDK-style) – It’s something you get with modern .Net core projects.

The difference between these two is quite easy. Both are XML-based formats that have a “project” root element. In the SDK-style, .csjproj file, the “project” element has an SDK attribute and the old format doesn’t have that SDK attribute. Sounds pretty easy, isn’t it?

Though developers are working on the .net framework for ages, the difference between .net core and .net framework and .net standard still creates confusion. To eliminate those misconceptions, this blog highlights what are the basic differences between these terms and when we should use one over the other.
So, let’s get started.

What is the .Net framework?

What can be done with the .Net framework?

What is .Net core?

Created by Microsoft, .Net Core is a cross-platform open-source framework used to build an app that can run on any platform. It’s a new framework written from scratch to build cross-platform apps that can work on any platform like Linux, Windows, or Mac. Earlier, the .Net framework was language independent but with the introduction of the .Net core, it is language and platform-independent.

What can be done with .Net core?

Case Study: Understanding the architecture of the .Net framework and .Net core 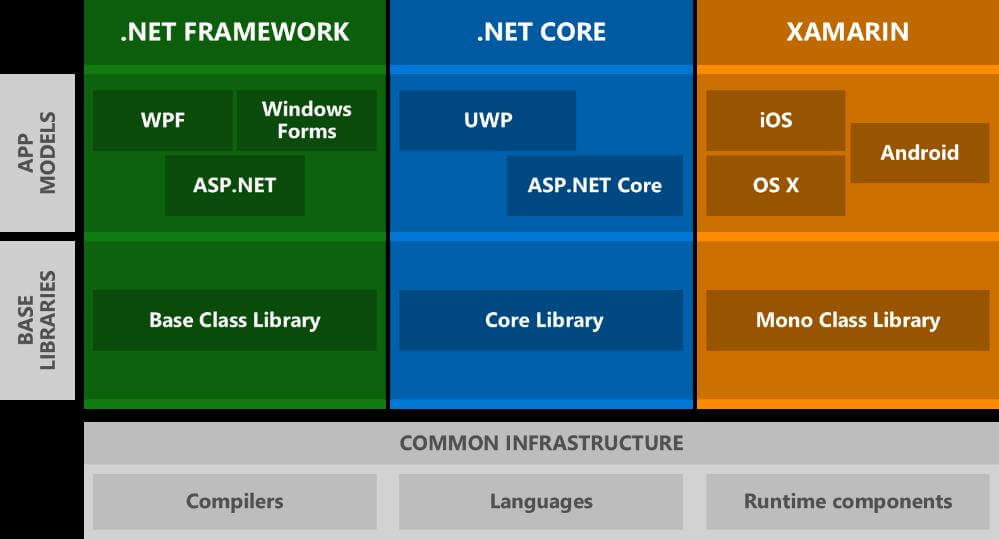 So, before going deep inside the .Net standard, let’s understand the architecture of the .Net framework and .Net core.

The above image states that each one has its Base class library.

So, what’s the Problem?

What is the Solution?

So, if you want to build an app and keep your shared code in BCL, you should use the .Net standard due to its portability with the .Net framework and ASP.NET Development Company

How .Net standard is backward compatible?

As far as compatibility with another framework is concerned, you’ll find that the .Net standard supports a wide range of frameworks. You can check out the updated list of the framework support here.

This is how the .Net standard is backward compatible.

When we should use one over the other?

Let’s discuss the points that need to be taken care of while choosing the target platform and its versions.

When you should choose .Net core?

When you should choose the .Net framework?

When .Net standard should be your development choice?

In case you want to share the common code across different .Net implementations, the .Net standard should be your first and foremost choice.

So, once you choose the right platform and project type for your app, the next step would be to use the correct version. Let’s assume that if you want to share the common code across platforms then the .Net class library would be your choice. In such a case, choosing the correct version would be a bit difficult. The Microsoft version table will guide you to choose the best version.

I hope the above blog will help you to identify the difference between these three platforms and will guide you to choose the best as per your business requirements. Though multiple factors need to be considered while choosing the target platform and right version, an experienced ASP.NET MVC Development Company can help you in the process and guide you to make the right choice as per your business goals. Hire Asp.Net MVC developer from a leading ASP.Net development company like Concetto Labs and get the best solution developed at competitive rates.

Get in touch with our experts to discuss your project.