Node.js vs io.js: Who Mimes Better?

Node.js vs io.js | Although there is no clear winner amongst the two, each of them stands out in their way to impress their prospects. So let’s study them in detail on a comparative note, so as to give you a clear picture of which one suits you best.

Node.js has been forked! The big tech world news.

But was it that big, when Node has already been forked in the past?  Remember JXcore. And this time four of the top contributors of Node.js are part of this forked activity. The main reason behind this forked project io.js was the fact that the number of commits on node.js over the past few years had measured a declining trend. 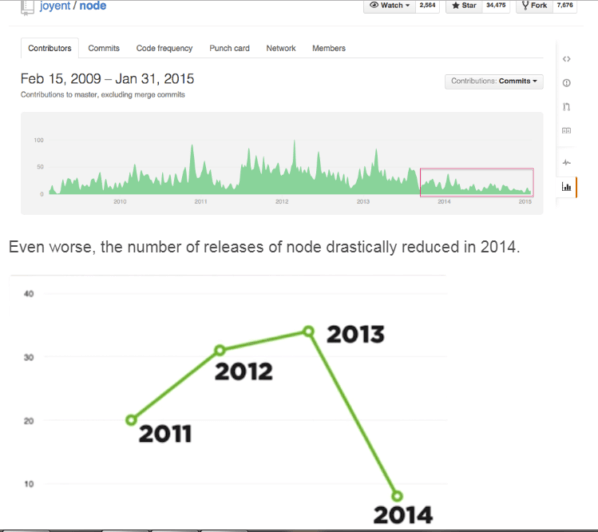 And also one of the other prime reasons was dissatisfaction in the way the project was being handled by Joyent. Efforts were made by some of the core contributors to provide a proper structure to Node and solve the problems related to it, to some extent, but in vain. In the name of ‘Node Forward’ independent efforts were made to improve the Node ecosystem, but that too was a failure.

So finally Fedor Indutny, one of the prime team members, came up with the fork named io.js. Others followed the league.

Here is all you need to know about io.js:

Io.js has strongly proved that the enhanced growth of the project is all because of open governance.

But in spite of this proof by io.js, there are two sides to each statement of the forked story.

So whether io.js is an acceptable match or not, solely depends on its prospective consumer.

Also Read: Node.Js: Is It Still Relevant For 2019 or AngularJS, ReactJS and VueJS will expand

An amalgamation of Node.js vs io.js

Since Node.js vs io.js was never intended to compete with Node, the chances of them getting hitched were always pretty big. And finally, this good big thing did happen. The entire amalgamation story between the two can be concluded in one single liner fact as io.js code rep will serve as the base whereas the name of Node.js will be used. This union between the two relieved several developers from the stress of choosing the one amongst the two sides of the same coin.

Node.js vs io.js: Who Mimes Better?