Is this not the first and the foremost aspect which is earnestly considered by every buyer ahead of making a purchase, heedless of the buyer and the product profile?

Although cost does vary in accordance with the benefits attached to the product; still a buyer first evaluates the cost and then ruminates about the benefits which that cost will bring along. When it comes to app development the cost considerations which are undertaken are

Apart from all the above cost comparison particulars, the economical app development price tag is also driven by the region where it is to be developed. Majorly, the US, UK, Ukraine, and India are the four distinguished countries that are the basis for the regional cost variation across the globe. Before going ahead with the study, it is to be clarified, that the content involves a comparison on the basis of monetary value only and not on the basis of quality.

On average, the value of app development (be it iOS or Android) which involves a time span of roughly eight weeks, will account for $ 48,000 in the US whereas in India it will cost 10x times less. Because of this vast dissimilarity in pricing, the cost comparison between India and the US is a big-eyed subject matter in the app market. It has been studied that the low-cost economic app development in India is because of the increased number of economical app developers and the low value of the Indian currency. In fact, it is this low pricing aspect of the Indian Economical app development market which has applauded India as an outsourcing hub.

Also Read: How Much Does It Cost To Hire An App Developer In 2020?

Very soon in the year 2018, India is going to become the nation with the largest developer community (4 million). There is a huge amount of untapped potential in the Indian app market. Therefore, Google and Apple have all their eyes set to clinch this opportunity. In July 2016, Android Skilling was launched by Google to train 2 million developers for the Android platform. Apart from this, Apple planned to come up with iOS App Design and Development Accelerator in Ahmedabad so as to provide specialized support to local iOS developers. 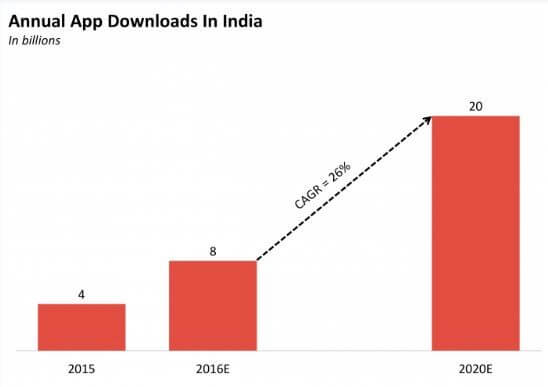 Our team has been providing mobile application development services since 2014. We have developed more than 1000 applications for various platforms such as android, ios, windows phones, blackberry, etc. We also provide custom software solutions for our clients.