It has Never Been Easier to Create Animations in Flutter 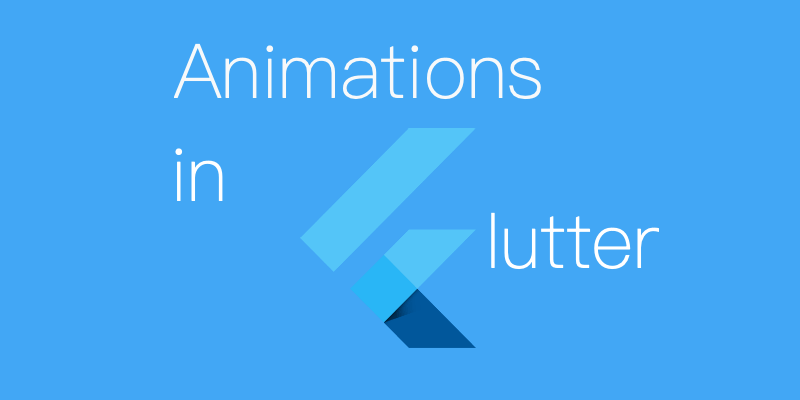 The UI of a website or an app feels intuitive if it has well-designed animations. A good animation contributes to the look and feel of your application and improves the user experience. Flutter has good animations support which allows you to come up with cool animations. There are many widgets in Flutter. For example the Material Widget, which comes with standard motion effects defined in their design specification.

Let’s start with a very simple rotation animation. Create a new file in Flutter and copy this code inside it. 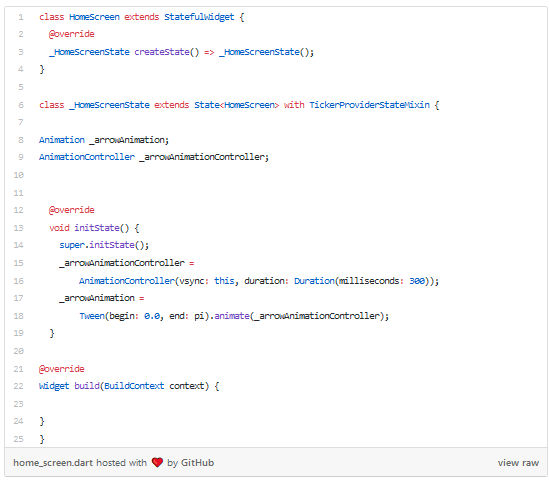 If you look at the initState() method you will see that _arroAnimationController variable is initialized at 300 milliseconds. It means the duration of the animation will be 300 milliseconds.

After that _arrowAnimation is initialized with the beginning value of “0.0” along with the end value been set at pi (value = 180). Which means the animation will rotate at 180 degrees.

Let’s now talk about the layout part of the screen. Copy the code given below inside the build method: 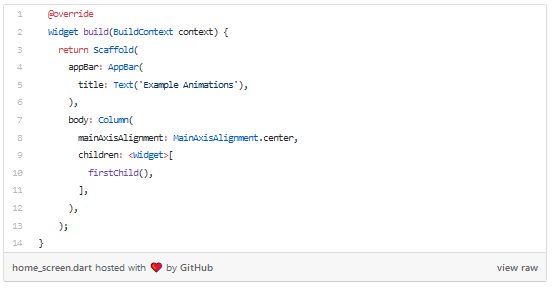 Now lets create the firstChild() widget. This is where the actual widget is present which itself contains a widget that needs to be animated and another widget that starts the animation. 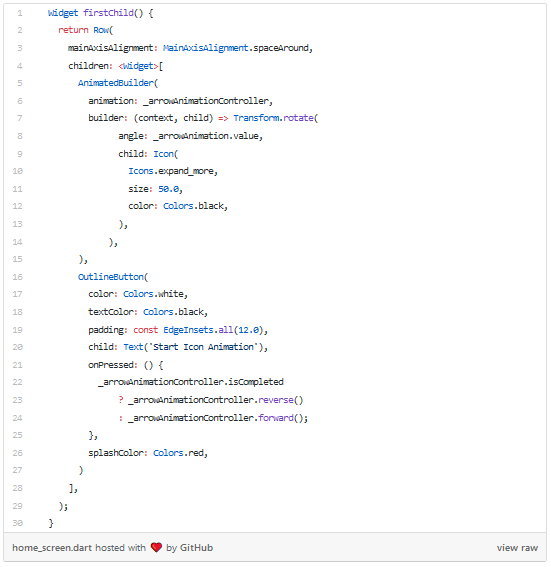 This code is easy to understand. The first child of the row icon which needs to be animated is wrapped with AnimatedBuilder widget.

Animated builder widget is the most commonly used widget for creating animations. Instead of calling the setState() method on each change in the value of animation it would be effective and efficient to AnimatedBuilder widget to create animations.

You may be wondering what Transform.rotate() widget is?

It is a widget that transforms its child along the center for the specified angle the widget needs to be rotated.

This is one example of animation which you can implement in flutter. There are numerous examples of animation techniques. What is more important is to understand and remember the concepts used in running animations in the flutter development platform.

Then there are two widgets which you come across when you do animation in a flutter:

As compared to animation widgets, transition will be harder to use but they will give you cleaner code and create advanced animations. For example, SlideTransition is more lightweight and cleaner to combine. This is not needed to be added in the StatefulWidget because it needs to have access to the Animation object.

These are compound and prebuild solutions. Some widgets might integrate multiple animations. For example, AnimateContainer can animate color, border, and size simultaneously. When it comes to code, to make similar animations using transitions, you would require much more line of code as compared to Animated Widgets.

One disadvantage of Animated Widgets is that they are much less flexible to change. They need to be in StatefulWidget as setState() needs to be called.

We hope this information will help you create awesome animations in the Flutter development environment. Concetto Labs is the best flutter app development company in the market. Our flutter development services are unmatched in the industry. If you need custom applications with the most intuitive UI for your clients then we are the ones you are looking to partner with.

How To Hire A Flutter App Developer And Streamline The Hiring Process?

Reading Time: 10 minutes Flutter is an open-source software development kit owned by Google. It’s mainly used for developing a mobile application. It released in 2017 and today is preferred as one of the best developing mobile apps. Flutter is a relatively new and… END_OF_DOCUMENT_TOKEN_TO_BE_REPLACED

Concetto Labs has been declared as a Top Flutter App Development Company of 2020 by TopDevelopers.co.

Reading Time: 6 minutes Flutter has proven to be one of the most exciting app development platforms in recent times. Also, the framework allows the developers to unleash their creative potential and helps in building great apps faster. TopDevelopers.co-published a press release on Top… END_OF_DOCUMENT_TOKEN_TO_BE_REPLACED