Why Use Flutter for Building Cross-Platform App?

Why to Use Flutter for Building Cross-Platform App?

As per the current findings

This framework has grabbed the attention of many companies, businesses, enterprises in a short period and some have already started implementing flutter to build their commercial business applications.

But what exactly is flutter? Why it is gaining so much popularity amongst cross-platform app development?

Why big-shot companies like Google or Alibaba is embracing flutter to write or rewrite their existing apps?

To answer all your questions below is something that we’re going to review in this flutter cross-platform guide.

Created by Google, Flutter is an open-source, cross-platform toolkit integrated to build applications for platforms such as mobile, web, and desktop using the same codebase.

That means developers can write code once and with minor changes as per the platform differences, the app can be deployed on all the platforms i.e- Android, iOS, Web platforms, and even wearable OS.

But flutter isn’t the only cross-platform framework to build apps. Other frameworks such as Xamarin, React Native and Cordova also let developers go with the approach of “write once, run everywhere”. Then, why flutter?

Let’s find out the answer in this post ahead.

Why flutter is still in hype for app development?

The reason behind this is quite simple:

It renders native-like application quality with the flexibility of cross-platform development. It renders the same look just like a Native app. It draws the UI from scratch instead of acting as a wrapper on the top of the native UI component like other frameworks do. This is something that makes flutter cross-platform app development stands apart.

What’s more? Being an open-source framework, companies that are closely working with Flutter and building apps can share their work and resources on GitHub. Sounds cool, isn’t it?

If you just take a look at the framework’s popularity on GitHub, you’ll notice that developers regardless of the company’s size love flutter and contribute regularly to make it even better.

Here’s when companies look forward to building apps with Flutter

Here’s how top companies approached Flutter to distinguish themselves in this competitive market.

Though flutter is not widely accepted as it deserves to be still more and more tech companies have started realizing its potential due to its increasing demand to build futuristic applications.
For instance, Google’s Adwords is built on Flutter. Even Alibaba considered flutter app development for the Xianyu app.

A well-known brand that enjoys millions of user base, yes I’m talking about JD finance is also built using flutter.

Also Read: Flutter Vs React Native – Which Is Worth Investing Hybrid Mobile Apps

Why is flutter better than React Native or Xamarin? 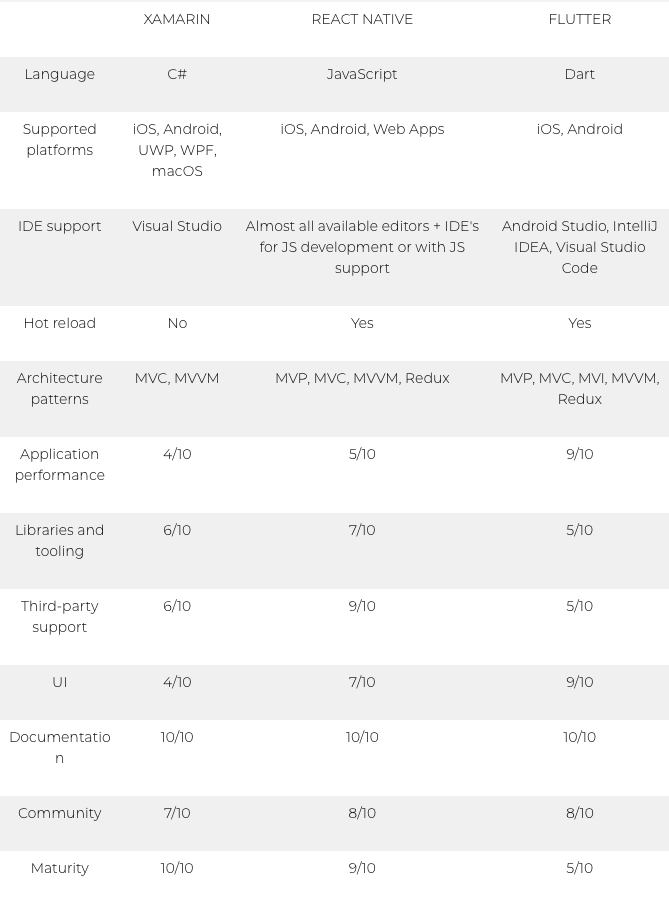 Some More Reasons to Build Apps With Flutter

How Long Does It Take to Build an App with Flutter? How Much Does It Cost?

As said, one of the biggest advantages of flutter is its ability to build an app for a few platforms. But, how fast does it go?

Let’s assume that you want to make an Instagram alike apps for two major platforms i.e Android and iOS and the entire development for both platforms will roughly take around 1400 hours.

In such a case, flutter cross-platform development will help you cover both platforms in just 700 hours.

If you want to hire flutter developer from the leading flutter development company then multiple total numbers of hours with the hourly rate of developers and you will get your estimated project cost.

At Concetto Labs, our development team says that the best apps made with flutter are:

We can build any of the flutter apps. You just name it and our flutter app development team will develop it for you.

But we may have to polish some features and functionalities to separate the two apps.

To know more about our flutter expertise, you can have a glance at our successful google flutter cross-platform mobile app here: View portfolio

Flutter is one of the best and most preferred cross-platform technologies to reach a larger user base over a short time. It is one of the best alternatives for startups and businesses that are looking to build an app with an apt development budget. This framework is expected to get more mature and in-depth in the upcoming years. Let’s wait to see what opportunities it brings for us.

Make Your Own Flattering Flutter App with Us!

Our team of expert developers is here to build scalable and powerful flutter applications for many platforms. Let’s schedule a meeting

1. How much time it will take to build an app in flutter?

Well, it depends on your project requirement and the scope of the work. The ideal time it takes to build a simple mobile app on android and iOS is 3 to 6 weeks.

2. What apps are made with flutter?

Some of the leading brands that have earned millions with flutter are JD Finance, eBay Motors, Google AdWords, Topline, Google Stadia, Reflect, and so on.

3. Why developers should embrace flutter for their mobile needs?

Below are some of the reasons that compel developers to build flutter based mobile app:

Why Use Flutter for Building Cross-Platform App?